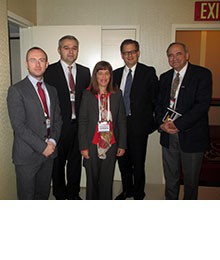 Associates of the Scientific Centre of Excellence for Croatian Glagolithism Assistant Professors Tomislav Galović, Ph.D. (Faculty of Humanities and Social Sciences, University of Zagreb) and Elvis Orbanić, Ph.D. (Director of the State Archives in Pazin) participated in at the largest American Slavic Conference: The 48th Annual ASEEES Convention held in Washington DC (USA) from 17th to 20th November 2016. The chief organiser of the conference was the Association for Slavic, Eastern European, & Eurasian Studies (ASEEES) whose seat is at the University of Pittsburgh (Pittsburgh, USA). This year’s plenary topic was “Global Conversations“. Our associates gave their presentations within the session Croatian Istria: Medieval Glagolithism & Modern Chakavianism as Dialogue – a Historical and Literary Perspective (held on 19th November 2016) chaired by John Peter Kraljic, MA (Croatian Academy of America, New York, USA), with Professor Ivo Šoljan, Ph.D. from the Grand Valley State University (Allendale, Michigan, USA) as a debater. T. Galović, Ph.D. first presented the establishment, operation and tasks of the Scientific Centre of Excellence for Croatian Glagolithism at the Old Church Slavonic Institute in Zagreb and its head Professor Milan Mihaljević, Ph.D. and then gave a talk on Beram (Istria) in the Middle Ages and Croatian Glagolithism. A Historiographical Perspective, whereas E. Orbanić, Ph.D. had a talk on Beram's Church and Society in the Early Modern Age. Assistant Professor Vjekoslava Jurdana, Ph.D. (Juraj Dobrila University of Pula) took part in this session as well with her paper on Exile, Nostalgia, Melancholia (on the Example of Chakavian Poetry of Drago Gervais). The same day the Croatian representatives also had an official reception at the Embassy of the Republic of Croatia in the United States of America in Washington organised by the Association for Croatian Studies (an ASEEES affiliate), where they were received by Joško Paro, Ambassador Extraordinary and Plenipotentiary, John P. Kraljic, President of the Croatian Academy of America and Vice-President of the Association for Croatian Studies, Aida Vidan, Ph.D., President of the Association for Croatian Studies and advisor at the Harvard University’s Center for European Studies (Cambridge, Massachusetts).