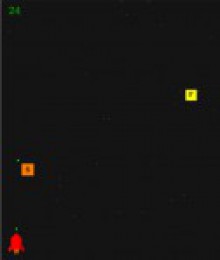 The Glagolitic Spaceship Game is a game in which you protect the Earth from asteroids by your spaceship. To be saved, the Earth should not be hit by more than five asteroids. The asteroids appear as blocks with Glagolitic letters. When you shoot them, you can see the Latin transliteration of the given Glagolitic letter popping up. The game is designed to be played on a PC with the mouse. Click on the picture below to start the game.