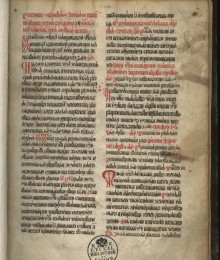 From today the Latin translation of the second part (The Sanctoral) of Drugi beramski (ljubljanski) brevijar (The Second Breviary from Beram (Ljubljana) is available online. It is a two-volume Croatian Glagolitic manuscript breviary from the 15th century. The first volume contains The Temporal, and the second contains The Sanctoral. The text was transliterated in the framework of the project carried out by the Scientific Centre of Excellence for Croatian Glagolithism.