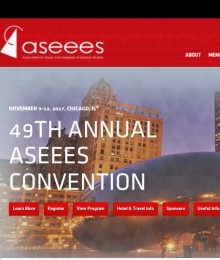 A dozen Croatian scholars, including five associates of the Scientific Centre, participated in this year’s major international conference The 49th Annual ASEEES Convention held from 9 to 12 November 2017 in Chicago (Illinois, US). The chief organizer of the conference was the Association for Slavic, Eastern European, & Eurasian Studies (ASEEES), and this year’s convention theme was “Transgressions”.

Our associates took part in two sessions with a total of four papers. Four associates of the Scientific Centre gave three papers in the session called Transgression in the Literary and Cultural Tradition of Medieval and Early Modern Istria and the Croatian Littoral. Professor Mateo Žagar, Ph.D. from the Faculty of Humanities and Social Sciences of the University of Zagreb gave a paper on Glagolitic vs. Latin Writing in Istria in the Middle Ages: Transgression and Regression, professor Silvana Vranić, Ph.D. and associate professor Sanja Zubčić, Ph.D. from the Faculty of Humanities and Social Sciences in Rijeka gave a paper on the Norm in the language of Istrian Glagolitic breviaries, and director of the State Archives in Pazin Elvis Orbanić, Ph.D. gave a paper on the Beram's Church and Society in the 18th Century.

In the session Transgressions of the Status Quo in the Western Balkans: The Declaration of Corfu (1917) and the Treaty of Paris (1947) assistant professor Tomislav Galović, Ph.D. from the Faculty of Humanities and Social Sciences of the University of Zagreb gave a paper on the Glagolitic Script as a Tool: Branko Fučić, the Croatian Identity of Istria, and the Paris Peace Conference, 1947.

The co-organizers of the Croatian panels, the Association for Croatian Studies and the Croatian Academy of America, organised a visit to the Croatian Ethnic Institute in Chicago run by Franciscans of the Holy Family Custody.